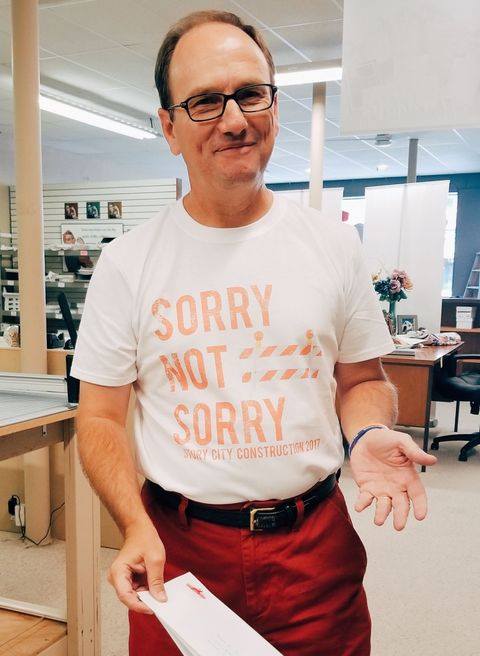 Last September I was in Atlanta, where my youngest brother Roy lives, and along with a few other family members and friends celebrated my sister Beth’s 50th birthday. My brother was at a Goodwill Store and came across some t-shirts that were donated by a local high school. The front of the t-shirt read, “Jackson Drama Club – 50 years in the making,” and on the back said, “What’s life without drama.” Brother Roy got each of us a t-shirt for the birthday dinner celebration to wear. The t-shirt said it all about the Jackson family.

When P.J. Fleck became Western Michigan University’s football coach the program’s mantra became “Row the Boat.” The university had a t-shirt with RTB, two oars, and a Bronco that my daughter Elizabeth Joy bought for me because it was “cute.” While in Atlanta, Elizabeth and I went to a Georgia Tech football game and I wore the t-shirt. While walking around the stadium a fan yelled out, “Row the Boat.” When Fleck became head coach at Minnesota he purchased the trademark phrase from WMU and now the Golden Gophers RTB!

With all the construction taking place last summer, PDG decided to have a little fun and so they designed and presented me with a t-shirt, “Sorry; Not Sorry – Story City Construction 2017.” PDG took a picture of me wearing the t-shirt and posted it on their Facebook page thanking me for the “hard work, dedication to make Story City roads better.” There were a few likes and a “spot on” comment from Vicki Fritz.

Remember in the movie Forest Gump when he decides to go on a run and a car drives by and sprays mud in his face; the man running alongside him hands him a yellow t-shirt. Forest wipes his face and leaves a smiley face on it. The man has one of those eureka moments and mass produces the mud smiley face on a yellow t-shirt. It really didn’t happen that way, but what is considered one the most iconic t-shirts came from one of those eureka moments when Milton Glaser designed on a napkin.

In 1913, the U.S Navy adopted the t-shirt as part of its standard uniform and has become a key marketing message for many. We see over 5,000 marketing messages each day. We see all kinds of e-mails, pictures, social media postings, and countless other sources with a logo or saying trying to grab our attention and get us to take notice of who they are, their product, or their service. We are constantly barraged with ads that are dull and boring, but we remember the ones that make us go “Wow” or make you laugh with either some catchy phrase or unique design.

“Just Do It” with or without the swoosh and we know it’s Nike. We are all aware of the logo for Superman and Batman on a t-shirt. Perhaps it’s a well-known band like Pink Floyd or the Rolling Stones and companies like Harley-Davidson and John Deere where “nothings runs like a Deere.” The fact is there is a saying and/or a logo and we automatically know who it is and what they are about.

One of the most intense college football rivalries of the late 1980’s was between Notre Dame and Miami. Prior to their 1988 match-up, the first in 26 years, a couple of enterprising ND students came up with a phrase and design that became one of sports most iconic t-shirts – Catholics v. Convicts – that inflamed the rivalry between these two powerhouse football schools.

A number of cities come up with “brands” to symbolize what their communities are about or hope to be. A number of years ago, Ames adopted the saying, “the smart choice” for its marketing efforts. I guess that would make Story City “the smarter choice” or perhaps “the other smart choice.” That doesn’t work because it sounds too much like “pork, the other white meat” and in Story City we raise turkeys. Maybe, “Story City – more fun than smart” should be our t-shirt? Wouldn’t you rather live with fun people?
For many years, Story City’s EDC motto for attracting and retaining businesses was, “Whatever it Takes!” Perhaps we might begin by asking residents, businesses, and visitors what they think when they hear “Story City?” It should stand out and not blend in with all the others. They are often off the wall with the intent of making you remember, and if memorable enough, take on a life of their own.
There are six basic elements to the message of a “t” that stands out:
1) Keep it simple
2) Got to have a little fun with it
3) It’s got to be clear and understandable
4) It speaks to the audience you are trying to reach
5) It’s brief and memorable with action or an emotion
6) Use Uncommon Language
And as they say in one state, “Don’t mess with Texas.”